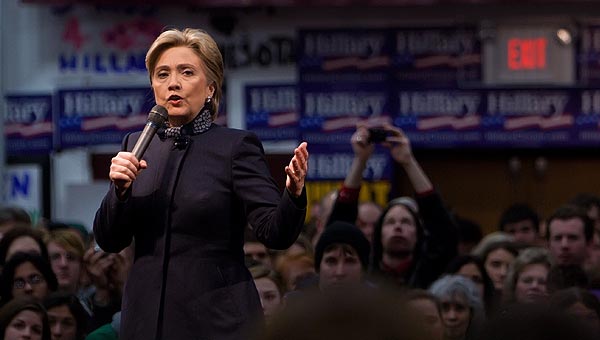 It seems Hillary has a “tell.”— whether discussing the state of her present relationship with Obama or her true feelings from the campaign days — Clinton is prone to saying one thing while her head movements say another.

Recently, on 60 Minutes, Secretary of State Hillary Clinton was asked about the animosity between her and President Barack Obama during the Democratic Primary campaign.

And you’ve repaired all of that [ill-will]? CBS journalist Scott Pelley asked the Secretary of State.

Oh, of course. Yes, Clinton said. We have a great relationship!.

But as she uttered those words, her face told a different story. While saying “Yes,” Clinton shook her head side-to-side as if she had answered the question “no.”

The incident takes place 9 minutes into the video; watch from the 8:30 mark for context.

This is not the first time Clinton shook her head no while saying yes.

“Tell” Number Two: Oh yes it’s just terrific that Oprah is campaigning for Obama
( shakes head no no no )

In a November 2007 interview with Katie Couric, Clinton answered a question about Oprah Winfrey’s endorsement of candidate Obama.

I think it’s great Clinton said, as she visibly shook her head side-to-side in a disapproving gesture. She continued shaking her head in the same direction as she expanded on her answer.

“Tell” Number Three: I’m ready to support whomever wins the nomination!
( shakes head no ..no )

Did you notice that Clinton also professed in the video above, that she was ready to support the Democratic candidate, if she lost the nomination. Watch carefully as she shakes her head in a negative gesture as if to say- Perish the thought!

This makes three examples of mismatched words and gestures coming from Clinton. Do they indicate that she is hiding the truth?  To make an informed analysis, we must first baseline Clinton’s behavior.

Does she exhibit a lot of head movements in conversation? Yes, she is constantly moving her head when talking—so a bobbing Hillary head doesn’t necessarily mean she is lying!

Does she normally shake her head “No” when honestly answering “No” to a question? Yes, we’ve seen Clinton answer “No” to questions while definitively shaking her head side to side in the typical “No” gesture.

Does she nod her head “Yes” when honestly answering “Yes”? Yes, we’ve seen this too. In the Katie Couric clip above, Clinton visibly changes her head motion to a straightforward “Yes” nod when discussing her pride in husband Bill’s involvement in the campaign. (1:45)

Hillary has a “tell.” She is indeed prone to saying “no” with her head shakes and “yes” with her words when the interviewer gets a little too close to the truth.

There are many more videos of Hillary out there – Send us other instances of Hillary saying yes while shaking her head no, and we will be sure to post them!