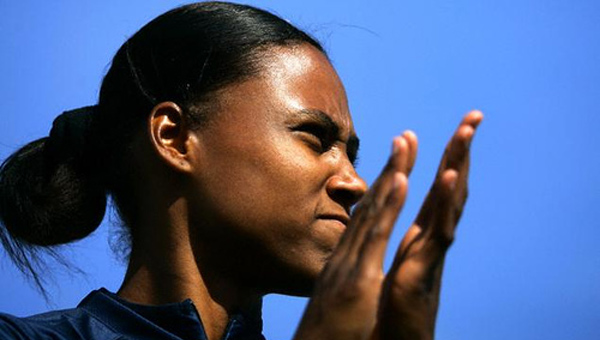 Marion Jones was a decorated Olympic medalist and world-record setting sprinter when she was accused in 2001 of using performance enhancing drugs. Until 2007, Jones repeatedly denied ever using substances that were banned by the sport, and in the clip below, we can observe the carefully-constructed defense that she mounted. On October 5, 2007, after years of denial, Jones admitted to using performance enhancing drugs during the 2000 Summer Olympics in Sydney. Her admission, and the subsequent charge of lying to Federal agents, cost Jones her Olympic medals, her lucrative endorsements, and six months in Federal prison.

Although Jones categorically denies ever having used performance enhancing drugs during this 2004 public denial of the charges, there are a few “tells” that suggest she isn’t speaking the whole truth.

First, at nearly 5 minutes in length, Jones spends very little time addressing the specific charges leveled against her. Instead, the majority of her prepared speech accuses the U.S. Anti-Doping Agency (USADA) of not being engaged in a “fair process” and “changing the rules in the middle of the game” to achieve “USADA desired results.” Shifting the attention away from one’s self should be a red flag for anyone detecting lies. By accusing the government of an unfair process, Jones diverted attention away from the accusations against her – and away from her lie. Liars often argue about the process and not the facts.

In addition, note how Jones places a great deal of emphasis on the fact that she has “never, ever failed a drug test.” At 1:20 in the clip, Jones states that she had taken over 160 tests before, during, and after the Olympic games and never failed. Do you think this statement exonerates Jones from the accusations?

Of course, nobody was accusing Jones of failing a drug test. That could be easily proven. The accusation was about taking performance enhancing drugs that were banned and then lying to Federal agents about it: a lie that would be undetected by a drug test.

Can you find any other “tells” that indicate Marion Jones was lying during this public denial?