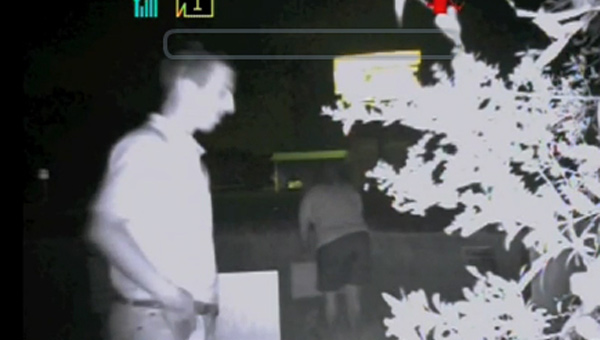 Florida Republican House candidate Greg Brown and his wife were videotaped taking down their campaign rival’s signs at an intersection on Saturday night. The camera that caught the political couple and its “aggressive campaigning” in action was put in place by none other than the son of said rival, Doug Broxson, when he suspected someone was removing his father’s signs.

Watch the video of the sneaky removal below; at one point, Brown can even be heard saying to his wife Jennifer, “Wait, your fingerprints are still on the ones laying down.”

Brown and Broxson are both vying for the Republican nomination for the Florida District 1 House seat in the August primary election. Apparently Brown is willing to go some great lengths to edge out his competition.

Brown responded to The Pensacola News Journal the following Monday that he did nothing illegal by removing his rival’s signs, as they were on a vacant lot owned by his supporter, according to Brown; and when asked what he did with the rival signs, Brown said, “I disposed of them. Quite honestly, I may have put them in my own trash can at home. I am not completely sure.”

Plausibility of that account aside, notice the bolstering statement within Brown’s response: The ‘quite honestly’ preface could point to deception, as liars often attempt to appear emphatic in their denials and choose these types of phrases carefully.

Whatever happened to those signs, it looks like Brown’s late-night clean-ups will have to be put on hold until the headlines die down.